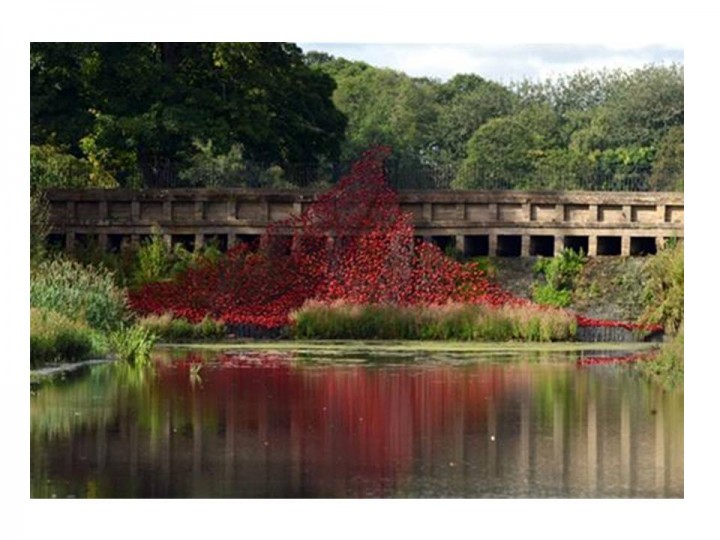 The Wave Poppy Sculpture which is part of the original sculpture installed at the Tower of London consisting of thousands of ceramic poppies can now be viewed at Yorkshire Sculpture Park during the period 5th September 2015 to 10th January 2016.  Yorskhire Sculpture Park located at West Bretton, Wakfield WF4 4LG is open between 10am and 6pm daily.

The breathtaking sculpture – along with Weeping Window a cascade comprising several thousand handmade ceramic poppies seen pouring from a high window to the ground below was initially conceived as on of the key dramatic sculptural elements in the installation Blood Swept Lands and Seas of Red at the Tower of London in the Autumn of 2014.  Over the course of their time at the Tower, the two sculptures were gradually surrounded by a vast field of ceramic poppies, each one planted by a volunteer in memory of the life of a British and Colonial Soldier lost during the First World War.  In their original setting they captured the public imagination and were visited by over five million people.

The two sculptures, created to mark the centenary of the outbreak of war, are now brought to audiences at venues across the country as part of the 14-18 NOW programme.

Yorkshire Sculpture Park offers a completely different setting for Wave and is presented in  YSP’s historic Lower Lake, a 1km walk from the main visitor centre and car park. Nearby surroundings include sculptures by world-class artists Anthony Caro, Antony Gormley and Julian Opie, alongside heritage features such as the Bretton Estate’s grand mansion house and the historic Cascade Bridge. A shuttle bus will be available, along with accessible parking for Blue Badge holders.