On the Sunday 22nd October the Sheffield Para Association, Families members and Keith Hopkins will be doing the Silverwood Miners Memorial Half Marathon Walk to raise £20,000 for the Memorial for the miners who were killed & injured in the 1966 pit disaster. Anyone who would like to go along with the group please be at the Silverwood Miners Welfare, Doncaster Road, Rotherham, S65 3ET for 10.00am

Shortly after 8 a.m. on 3 February 1966, miners starting their shift went down the pit to board the “Paddy mail“. It was normal practice for the ‘man-rider’ to be followed by a second train which carried equipment. On this day the second train suddenly ran out of control and caught up with the ‘man-riding’ train, hitting it hard in the rear. Ten men lost their lives and a further 29 miners were injured.

The accident featured in the local and national press, much of the coverage giving prominence to Sister Adsetts, a member of the Silverwood medical team who, working with members of the Rotherham Mines Rescue team, tended the injured as they were brought from the wreckage. The unusual feature of a woman coming out from the pit led to headlines such as “The Angel with the dirty face”.

The accident happened some one and a half miles from the pit bottom in the Braithwell return roadway. When the locomotives and the vehicles were removed to the underground workshops for testing, the brakes proved to be in full working order.

In the report on the accident by the Mines Inspectorate, the main recommendation was that a train carrying materials must not follow a man-riding train. The rules on underground train operation were re-written. 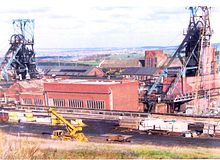