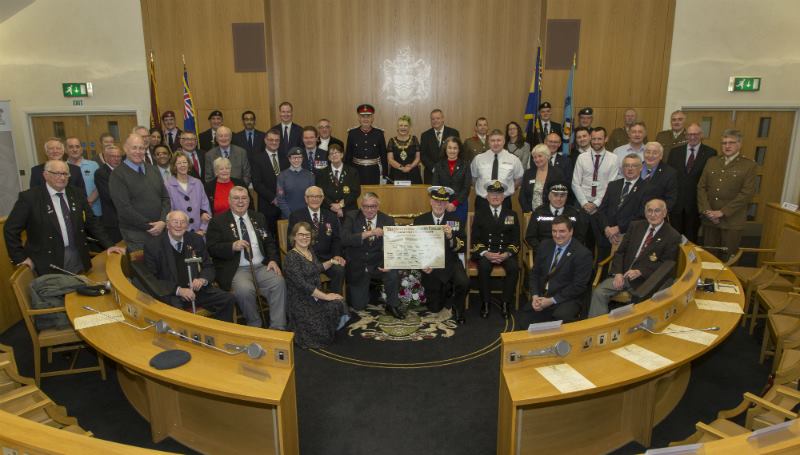 Leaders from the worlds of business, charity, the community and the Council have once again shown their solidarity in ensuring people who were in the armed forces have fair access to services.

A second Armed Forces Covenant was also signed by Rotherham Council and the Ministry of Defence in a promise from the nation that those who serve or have served, and their families, are treated fairly.

This is the seventh year of Rotherham supporting this initiative, providing an opportunity for the Council and its public, private and voluntary partners to work together to make the transition easier for military personnel integrating into civilian life.

Mayor of Rotherham, Cllr Eve Rose Keenan said: “The re-signing of the Armed Forces Community Covenant in our town demonstrates our dedication to recognising the commitment and sacrifice that military life suggests.

“So many people in our borough commit themselves daily to selfless acts to support those most in need or to develop and grow local communities, so it is with this spirit I am proud that the Council and our partners have taken part in this public promise. It means our armed forces and their loved ones are provided with support from businesses, local government, public health, charities and individuals.”

Cllr Ian Jones, Armed Forces Champion for Rotherham Council added: “Since the Covenant was first signed by the Council and partners in 2012, we’ve seen really good changes instigated in Rotherham. The Covenant has given those who have signed up to work in partnership the opportunity to apply for Government funding for community projects geared to helping armed forces personnel and their families.”

Since originally signing the Covenant, Rotherham Council along with other South Yorkshire authorities, have been awarded over a quarter of a million pounds from the Ministry of Defence to fund work with the military community across the county. This includes a grant to identify the size, nature and location of veterans across South Yorkshire, through a survey led by Sheffield Hallam University, whilst a second grant will support the expansion of the outreach provision managed by the local Rotherham military charity, Military Community Veterans Centre.

Rotherham Council’s Assistant Chief Executive, Shokat Lal said: “By re-signing the Covenant, Rotherham Council has committed to providing the necessary support to our military community so that they can enjoy good health, live good quality of lives as one community or building a borough where people can grow, flourish and prosper.”

Members of organisations committed to addressing issues for military personnel attended the signing ceremony last Friday (March 16) along with representatives of local armed forces organisations, the Army, MP Sarah Champion as well as the Leader of the Council, Cllr Chris Read, and Chief Executive Sharon Kemp.