We received a request from Councillor Deborah Fenwick-Green to help with a schools project at Badsley Moor Primary School. Ron kindly gave the job to me to sort out.  The children wanted information about WW2 and the Cold  War, and our role in either.

On 5th October, we attended with Dougie Watson, our glider pilot, and his daughter.
12th October saw Kevin Courtney letting the kids know what it is like to serve with the RRF and RMP.

19th October was myself with Judith, and the Parachute regiment was in focus. Took up several pieces of equipment and photos.

26th October our RAMC medic will be enthralling the children with his memoirs.
9th November sees Bill getting on stage with his Royal Artillery tales.
16th November we hope to have our friends from the Royal Signals (TBC)
23rd November sees Geoff, Dave and Mike putting the Royal Navy in the picture
30th November Our old Chairman Steve Bentham-Bates will  be strutting his stuff for the RAF.

The children loved photos and items of equipment, as well as our stories. It is like University Challenge when we get to the question and answer sessions.

Judith and I have supported our colleagues when they have been presenting, and now we know the system we are ordering our lunch the week before. Got to feed the troops ! 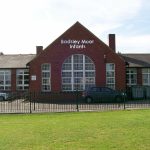