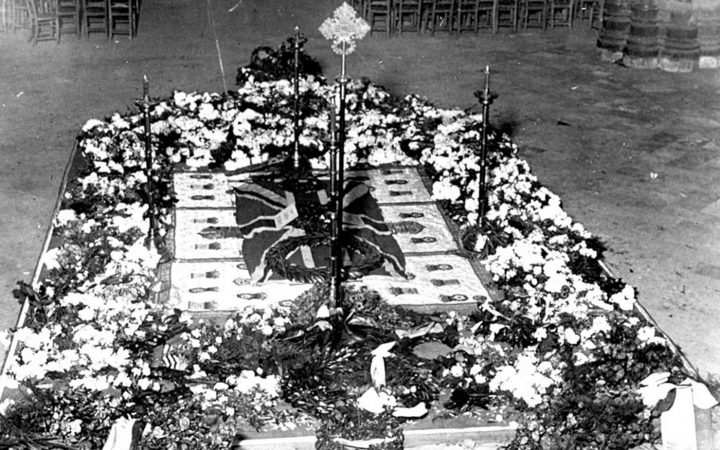 On the morning of 11th November the coffin was placed on a gun carriage drawn by six black horses and began its journey through the crowd-lined streets, making its first stop in Whitehall where the Cenotaph was unveiled by King George V. The King placed his wreath of red roses and bay leaves on the coffin. His card read “In proud memory of those Warriors who died unknown in the Great War. Unknown, and yet well-known; as dying, and behold they live. George R.I. November 11th 1920”. Then the carriage, with pall bearers (Admirals) Lord Beatty, Sir Hedworth Meux, Sir Henry Jackson, Sir C.E. Madden, (Field Marshals) Lord French, Lord Haig, Lord Methuen, Sir Henry Wilson, (Generals) Lord Horne, Lord Byng, Albert Farrar-Gatliff and Air Chief Marshal Sir Hugh Trenchard, followed by the King, members of the Royal Family and ministers of State, made its way to the north door of Westminster Abbey.

While the Cenotaph unveiling was taking place the Choir inside the Abbey sang, unaccompanied, “O Valiant Hearts” (to the tune Ellers). The hymn “O God our help in ages past” was sung by the congregation and after prayers there was the two minutes silence at 11am. The Contakion of the Faithful Departed was then sung and the choir processed to the north porch to meet the coffin, with the hymn “Brief life is here our portion” being sung.

The shortened form of the Burial Service began with the singing of the verses  “I am the resurrection and the life” (set by William Croft) and “Thou knowest Lord” (by Henry Purcell) during the procession to the grave. The coffin was borne to the west end of the nave through the congregation of around 1,000 mourners and a guard of honour of 100 holders of the Victoria Cross (from all three services). They were under the command of Colonel Freyburg VC. The choir sang the 23rd Psalm.

After the hymn “Lead kindly light”, the King stepped forward and dropped a handful of French earth onto the coffin from a silver shell as it was lowered into the grave. At the close of the service, after the hymn “Abide with me” (tune Eventide) and prayers, the congregation sang Rudyard Kipling’s solemn Recessional “God of our fathers” (to the tune Melita), after which the Reveille was sounded by trumpeters (the Last Post had already been sounded at the Cenotaph unveiling). Other eminent members of the congregation were Queen Alexandra, the queens of Spain and Norway, the Duke of Connaught, politicians Lloyd George and Asquith, and Sir Douglas Dawson.

The grave was then covered by a silk funeral pall, which had been presented to the Abbey by the Actors’ Church Union in memory of their fallen comrades, with the Padre’s flag lying over this. Servicemen kept watch at each corner of the grave while thousands of mourners filed past. Wreaths brought over on HMS Verdun were added to others around the grave. The Abyssinian cross, presented to the Abbey at the time of the 1902 coronation, stood at the west end. The Abbey organ was played while the church remained open to the public. After the Abbey had closed for the night some of the choristers went back into the nave and one later wrote “The Abbey was empty save for the guard of honour stiffly to attention, arms (rifles) reversed, heads bowed and quite still – the whole scene illuminated by just four candles”.

The grave was filled in, using 100 sandbags of earth from the battlefields, on 18th November and then covered by a temporary stone with a gilded inscription on it: 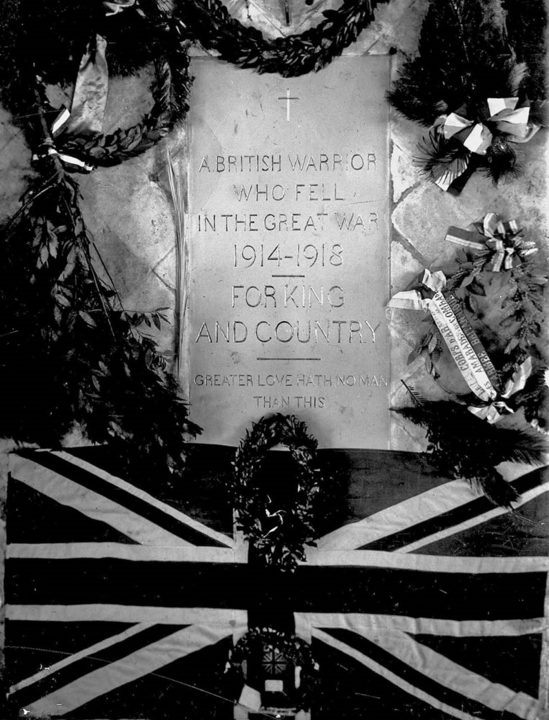