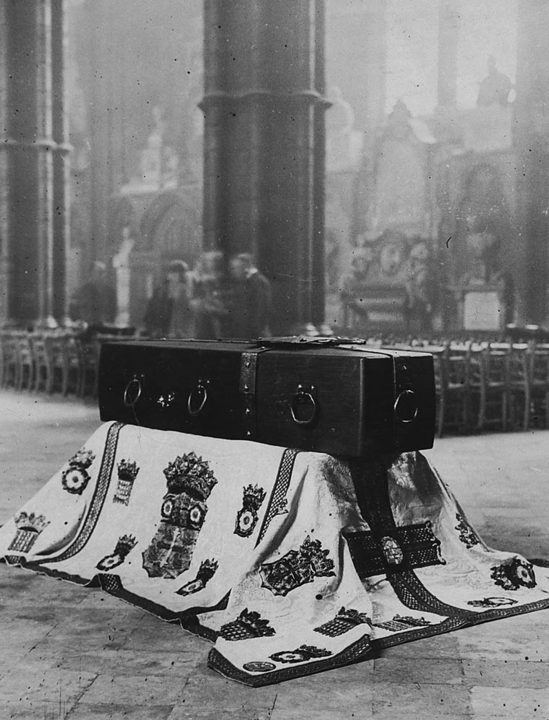 The idea of such a burial seems first to have come to a chaplain at the Front, the Reverend David Railton (1884-1955), when he noticed in 1916 in a back garden at Armentières, a grave with a rough cross on which were pencilled the words “An Unknown British Soldier”. In August 1920 he wrote to the Dean of Westminster, Herbert Ryle, through whose energies this memorial was carried into effect. The body was chosen from unknown British servicemen exhumed from four battle areas, the Aisne, the Somme, Arras and Ypres. (some sources say six bodies but confirmed accounts say four).

The remains were brought to the chapel at St. Pol on the night of 7th November 1920. The General Officer in charge of troops in France and Flanders, Brigadier General L.J. Wyatt, with Colonel Gell, went into the chapel alone, where the bodies on stretchers were covered by Union Flags. They had no idea from which area the bodies had come. General Wyatt selected one and the two officers placed it in a plain coffin and sealed it. The other three bodies were reburied. General Wyatt said they were re-buried at the St Pol cemetery but Lt. (later Major General Sir) Cecil Smith says they were buried beside the Albert-Baupaume road to be discovered there by parties searching for bodies in the area.

In the morning Chaplains of the Church of England, the Roman Catholic Church and Non-Conformist churches held a service in the chapel before the body was escorted to Boulogne to rest overnight. The next day the coffin was placed inside another which had been sent over specially from England made of two-inch thick oak from a tree which had grown in Hampton Court Palace garden, lined with zinc. It was covered with the flag that David Railton had used as an altar cloth during the War (known as the Ypres or Padre’s Flag, which now hangs in St George’s Chapel). Within the wrought iron bands of this coffin had been placed a 16th century crusader’s sword from the Tower of London collection. The inner coffin shell was made by Walter Jackson of the firm of Ingall, Parsons & Clive Forward at Harrow, north London and the larger coffin was supplied by the undertakers in charge of the arrangements, Nodes & Son.

The coffin plate bore the inscription:

The ironwork and coffin plate were made by D.J. Williams of the Brunswick Ironworks at Caernarfon in Wales. The destroyer HMS Verdun, whose ship’s bell was presented to the Abbey and now hangs near the grave, transported the coffin to Dover and it was then taken by train to Victoria station in London where it rested overnight.