The T. N. Jackson VC paving stone will be dedicated Saturday 26th January, 10.30, Swinton War Memorial. The Lord Lieutenant & Mayor are due to attend; Father Barley will do the blessing. Following this the party will move to the Swinton Peace Gardens to dedicate a new ‘poppy’ memorial bench.

Thomas Norman Jackson (1897-1918) was born on 11th February 1897 and lived at 3 Market Street, Swinton in Rotherham. He was the eldest son of Thomas Edwin and Emma Jackson (nee Vickers). His parents had married in Swinton on 14th November 1894. He worked as an apprentice fitter at a local iron works and then at Mexborough Locomotive Depot as an engine cleaner. Thomas voluntarily enlisted in the army in September 1916. He joined the 1 Battalion of the Coldstream Guards.

His division were storming the Canal Du Nord which was a part of the Hindenburg Line, which was a vast system of German defences in the North Eastern area of France. On 27th September 1918, Norman’s battalion was ordered to breach the German defences over the Canal du Nord. Whilst being held up by machine gun fire, Thomas’ Company Commander, Captain Frisby, asked for volunteers to charge the machine gun nest which was holding them up. Thomas was one the first to volunteer along with another man. They both followed their company commander and managed to take over two of the machine guns and took twelve of the soldiers as prisoners. This allowed his company to advance.

Later on in the same day, his platoon was ordered to charge an enemy trench. Thomas was one of the first to charge into the trench and was noted to have shouted ‘Come on boys!’ He jumped into the trench and killed the first two soldiers he met. He was then shot in the head and died. Captain Frisby recommended him for the Victoria Cross. His Victoria Cross citation reads that he displayed ‘Great Valour’. He died with the rank of Lance Corporal.

Thomas was buried with full military honours in Sanders Keep Military Cemetery, Graincourt-les-Havrincourt, France. Jackson’s award was published in the London Gazette on 26th November 1918. His fiancée Daisy Flatt, from Kenley, Surrey, and his sister Charlotte (Lottie) were presented with his Victoria Cross by the King on Saturday 29th March 1919.

His name is displayed on the memorial plaque at the Mexborough Railway Station where he worked as an engine cleaner during peacetime. Unfortunately, Lance Corporal Jackson’s name was not added to the Great Central Railway War Memorial when it was built in Sheffield in 1922. It wasn’t until 2016 that L/Cpl Jackson’s name was added to the memorial. A painting was commissioned by the local constabulary which is hanging in the Swinton Library. His medals including the VC, British War Medal 1914-20, Victory Medal 1914-19 with Mentioned in Despatches oakleaf, are kept in the Coldstream Guards Museum in Wellington Barracks, London. 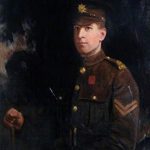 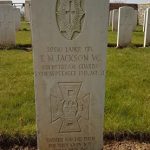