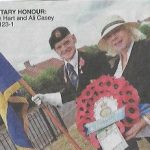 This marked the 90th anniversary since The Great Pilgrimage, when veterans and their wives —or widows — visited the battlefields where their loved ones fought and fell from 1914 – 18. The pair joined 30 other RBL ambassadors on a coach to Belgium.

Cllr Hart, who formerly served in the Royal Air Force, planned to document the trip in a diary. “More than 57,000 men died on the firstly of the Somme Offensive, ” she said. “Hundreds of them were never found — Belgium farmers are still digging up their photographs and letters.

“We want their relatives and descendants to know that people still think of them.”