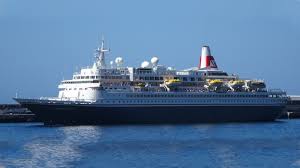 6 June 2019 marks the 75th anniversary of The D-Day Landings – one of the most remarkable Allied wartime operations.

The Royal British Legion is working with the UK Government and other stakeholders to plan significant commemorations to mark D-Day 75, both in Normandy and across the United Kingdom.

We’re excited to announce that The Royal British Legion, in partnership with Arena Travel, have chartered a ship, the MV Boudicca, to provide a fully funded tour for 300 D-Day Veterans. Each veteran is able to bring one carer who will also be fully funded.

Priority will be given to veterans who participated in the D-Day Landings, with the remaining spaces allocated to Normandy Veterans via a ballot.

Three-hundred D-Day veterans will cross the Channel in a specially-chartered ship as part of events to commemorate the 75th anniversary of the Normandy landings.

The MV Boudicca will leave Portsmouth for Normandy before sunset on 5 June.

Other plans for the anniversary include a military parade and Sunset Concert for Heroes in Portsmouth.

In June 1944, Allied forces invaded Nazi-occupied France marking the beginning of the end for Adolf Hitler’s domination of Europe.

Portsmouth was one of the key embarkation points for many of the landing craft.

The anniversary plans were announced by the vice chief of the defence staff General Sir Gordon Messenger at the D-Day Story Museum in Southsea.

The MV Boudicca, funded by the Royal British Legion and a Libor grant, will take 300 veterans to commemorative events in Normandy, reliving the voyages made 75 years earlier.

Defence Secretary Gavin Williamson said: “Winston Churchill rightly said that D-Day was ‘undoubtedly the most complicated and difficult’ operation that had ever taken place.

“This June we will show our veterans that the debt to them is never forgotten for the price they paid for the freedom and peace we now enjoy.”

Bob Gamble, from the Royal British Legion, invited veterans wanting to travel to contact the legion by 4 February.

“As we mark 75 years since the largest seaborne invasion the world has ever seen we salute the bravery and sacrifice of all those who took part in liberating Europe,” he said.

Five days of events held in Portsmouth will include a military parade along the seafront and flypast of period aircraft.

The 1940s-themed Portsmouth Revival Festival will culminate in a Sunset Concert for Heroes, featuring acts including the Military Wives Choir and the D-Day Darlings.

Events in France will include an inauguration of the British Normandy Memorial site and Royal British Legion services at Bayeux Cathedral and Bayeux Cemetery.

They will conclude with music and entertainment beside the beaches in Arromanches.

As many as 4,413 Allied troops died on the day of the invasion. By the end of D-Day, the Allies had established a foothold in France. Within 11 months Nazi Germany was defeated.